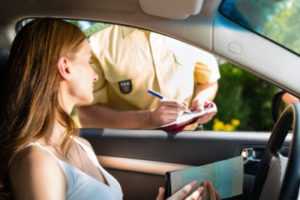 For a first-time, simple traffic ticket you probably think you do not need the help of a lawyer. Usually you can negotiate the fines or costs or traffic school with the prosecutor on your own.  However, it is not always apparent what is a “simple” traffic ticket.  Three things raise the stakes on traffic offenses:

Generally, this means that somehow you managed to hack off the police officer.  Also, it probably means that you are accused of doing something dangerous. DUI aside, more first offenders go to jail for Reckless Driving than any other offense. Also, a conviction for Reckless Driving puts six points on your license and may significantly increase your insurance costs. You do not want to try and deal with this on your own.

Leaving the Scene of an Accident

This is another serious traffic offense.  Depending on how serious the accident, it may even be a felony.  Even the misdemeanor version requires that your license be suspended upon conviction. Also, unlike most traffic offenses, there tend to be angry witnesses on the other side who want you to go to jail. This is not the time to go it alone.

It is a criminal offense in Alabama to drive without insurance, proper registration and a valid driver’s license. You could go to jail for any one of these offenses. However, it is my experience that most police, judges and prosecutors would rather see you go get your licenses, registration or insurance than see you get convicted. Don’t just pay these tickets; get the problem taken care of and generally the court will dismiss it.

Driving on a Suspended License

In Alabama you must have a valid driver’s license in order to operate a vehicle on the roads of the State.  Your license can be suspended for a number of reasons, sometimes without your knowledge. If you are convicted of driving on a suspended license you could go to jail, but even if you don’t go to jail your license will be suspended again for at least 90 days.

I am a lawyer, which means that my soapbox goes with me wherever I go. But if you don’t mind, I’m going to get it out for a minute.

I live in the South, in a largely rural county. There is no meaningful public transportation. If people don’t drive they can’t work. So when someone’s license is suspended they have to drive just to keep body and soul together, which often means they get charged with driving while suspended (which adds an additional suspension). Then they get charged again and again and again until pretty soon there is no chance they will ever get another driver’s license.

I am not saying that there should be no consequences to breaking the law, but this kind of never-ending cycle keeps otherwise law-abiding people poor. That is to say — if you are charged with DWSL (Driving With a Suspended License) it is important that you get some help. Otherwise, the consequences could last for a long time.